How to Take Back the Conversation From Extremists 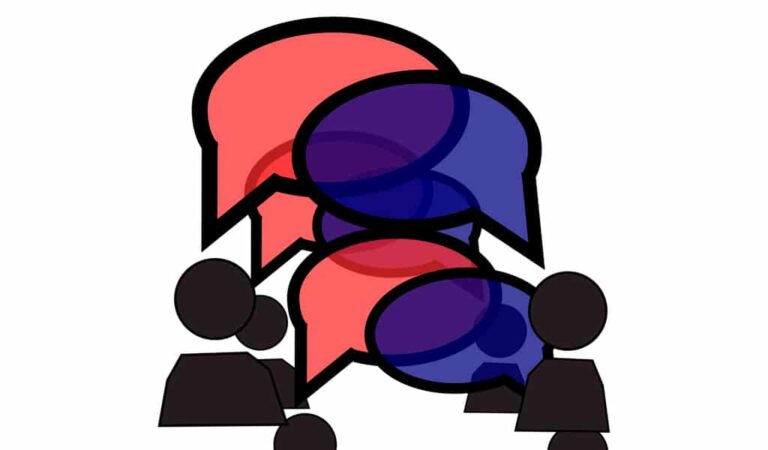 Here is some good, practical advice

One of the favorite tactics of extremists is to change the subject. They don’t want to start talking honestly about the lives they are ruining or the practical problems with their utopian dreams. They want to talk about their grievances and the twisted fantasy they are selling as a solution.

Don’t let them get away with it. Defeating extremist ideologies requires challenging their beliefs and holding them up for scrutiny and ridicule.

Here are three major ways extremists attempt to misdirect the conversation and how responsible journalists and members of the public can tackle it.

Whataboutism is one of the oldest tricks in the political playbook. Instead of addressing the matter at hand, the extremist is trying to make their interlocutor look over there by pointing out some other heinous thing. This will usually (although not always) be something the extremists political enemies are doing.

The goal is to make you stop attacking their position and start defending something else. It moves the territory of the argument and lets the extremist vent their grievances without having to defend their solutions.

What it looks like:  “How can you attack Islamism for being oppressive when American policemen are murdering black men every day?”

Why it works: Whataboutism works because the world is complicated. Big political problems rarely have just one cause, so it can be tempting to derail an important conversation with a seemingly related caveat. The difference between constructive commentary and Whataboutism is whether or not the issue is related, and whether or not these issues can be discussed in conjunction.

This tactic works especially well on policy wonks who pride themselves on being well informed.

Instead, remain calm and bring the focus back to the real issue: their unacceptable position. Calmly state that the issue they are raising, even if true, does not excuse or justify their radical beliefs.

Grievance mongering is when extremists refuse to take responsibility for their beliefs and instead start listing off a series of grievances.

The key thing to remember about grievances is that even in cases where they are legitimate, there are far more constructive ways to address them than joining an extremist ideology.

Extremists are hoping you will ignore this and focus on whether or not the things they are saying are true and harmful. This will enable them to repeat their talking points.  If there is an audience, they will use this as an opportunity to recruit others to their side.

What it looks like: “Middle Eastern jihadist groups only came into existence because of America’s corrupt support for Arab dictators who persecuted people in the Middle East for the last 50 years.”

Why it works: Often the grievances are real. Even when they are not real, a person can get easily sidetracked into a conversation about the question of their existence.

Dealing with genuine grievances on a big scale does lower the risk of more people being radicalized. But in most personal situations, relating to an extremist’s grievances distracts attention from the problem of their extremist actions and beliefs and only reinforces their self-righteousness.

Grievance mongering works especially well on the compassionate, who earnestly want to address their suffering.

How to tackle it: Throw the question back to the extremist. Ask them if they think their policy goals are a good solution to that grievance. How exactly does blowing up civilians in a supermarket address the problem of anti-Muslim bigotry in the West?

This achieves two things: It sidesteps the complexity of whether the grievance is justified and it’s solution-oriented.

This tactic is really the same as good old-fashioned propaganda. This approach focuses on the emotion they want the viewer to feel and targets that emotion in a way which subtly slips in their message.

This tactic uses multimedia, employing music, posters, gifs, cartoons and the like to spread extremist ideology.

One aim of this tactic is to normalize the symbols of the extremist group along with glamorizing membership in and the vision of the group.

What it Looks Like: “Look, this frog jumping onto a lilypad has a swastika tattoo.”

Why it works: Byte-sized media messages and memes are hard to counter. The mainstream media has little in the way of a tangible proposition they are putting forward, so it’s hard to come up with a rebuttal.

Messages in memes and the like are very simple and aim to resonate emotionally. Repeated exposure to them over time numb one’s sensibilities to the group putting out the messaging. Moreover, any outraged reaction will simply give airtime to the targeted group and make those who are outraged look like complete squares.

How to tackle it: Just ignore it. Completely. Don’t show the clips on your TV show, don’t share the images, don’t post them into articles to deconstruct them.

While counter-extremism researchers who are attempting to build viable alternative outlooks need to be aware of how extremists operate and thus look at this sort of content, it doesn’t need to be broadcast on CNN.

The perfect example of how not to engage with this type of warfare is the liberal media’s hysterical response to the semi-ironic “OK” symbol campaign by trolls working in tandem with genuine white nationalists. Leveraging prank culture, they were able to turn the OK symbol, previously a non-political sign, into a white power sign using almost entirely earned media.