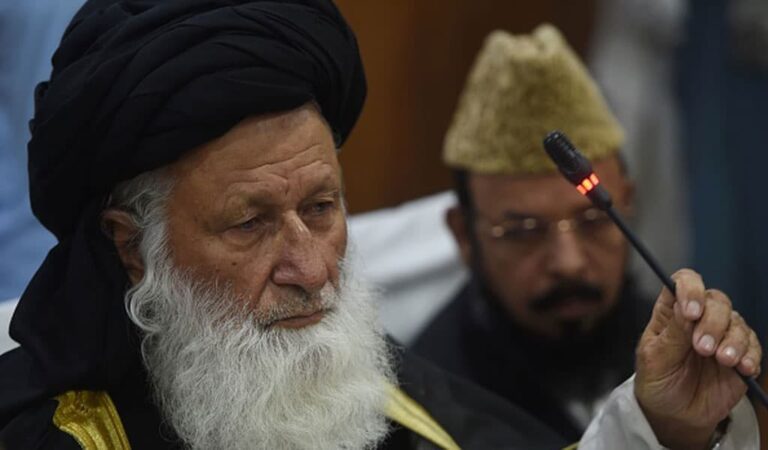 Breaking news out of Pakistan signals a possible new layer for peace in the Middle East, as a senior cleric goes on the record to acknowledge that Israel belongs to the Jews.

How are we to understand this news? First, the conversation draws on history, specifically the history of the Islamic caliphates and its interface with theology.Â  Second, this fact opens up a larger conversation for concrete changes in the Islamic world that can be found on the razor’s edge of both frameworks, one that shows Islam still has plenty of wiggle room for advancement.

Calling on Muslims around the world to accept the Jewish state, Maulana Muhammad Khan Sherani announcedÂ before Christmas that the historic land of Israel “belongs only to the Jews.”

Sherani’s background includes serving as chairman of Pakistan’s Council of Islamic Ideology, which advises the Pakistani government and parliament on Islamic law. Until 2018, he was also a lawmaker in the National Assembly for the Jamiat Ulema-e-Islam party, a Sunni Deobandi political party in Pakistan. His credentials give the announcement even greater weight as they are rooted in Islamic theology.

“Educated Muslims need to understand that the Quran and history prove to us that the Land of Israel belongs only to the Jews. King David built the house of God in Jerusalem for the Israelis and not for the Palestinians.” – Maulana Muhammad Khan Sherani

He went to support what sounds like a blurred two-state solution without outlining boundaries, saying, “There should be an Israeli state in the western part and a Palestinian state in the eastern part.”

The emphasis on education and the need to understand theology and the historic backbone that the theology is carried on is a critical message for Muslims — one that speaks to the evolving nature of Islam and the awareness that Islam is what Muslims do with it.

Islam in the 21st century is no different than any other period in Islamic history; it is still being carved and etched into human understanding.

The marriage between theology and history is crucial to an understanding of Islam. Reinforcement for Sherani’s announcement goes beyond the Quran (where mention of a Jewish homeland is slim to non-existent) and to where a precedent for recognizing Israel can be found. That precedent lies in the second Islamic caliphate that offers not only recognition of Israel but an example to embrace a sovereign Jewish homeland in Israel.

The sanctification of Jerusalem happened during the Ummayad Caliphate, which lasted from 637 AD to 1099 AD. The 400-year rule of the caliphate was sandwiched between the chronicles of back-and-forth wars between Byzantine and Persia and the Crusades.

The Byzantines, who had banned Jews from worshiping on the Temple Mount and at the Wailing Wall, fell in battle to the Ummayad Caliphate, which granted both Christians and Jews safety. As history notes, for the first time “after almost 500 years of oppressive Roman rule, Jews were once again allowed to live and worship inside Jerusalem.”

Fast forward to the 21st century. Sherani’s announcement is significant because it is another layer to the ongoing development of Islam. Here’s how:

The statements by Sherani regarding Israel are incredibly important in light of other statements that Sherani has made. In the context of the interview where he accepts Quranic verses condoning wife beatings (however light), Sherani says, “You cannot ask someone to reconsider the Quran.”

This brings us to an interesting side point in this discussion: Sherani’s position on Israel clearly points to a precedent in Islam of reframing our understanding of what the Quran says (without changing the Quran itself). If the Ummayad Caliphate initiated development projects to shape theology and manifest an expansive approach to the faith, the same can be done in any other area … including womenâ€™s rights, without needing to poke holes in source material like the Quran.

That alone is a significant leap in understanding the marriage between history and theology in Islam. This type of “reconstructive” theology lays out a pathway for recognizing Jerusalem but also opens the gates for many places where we could go next.