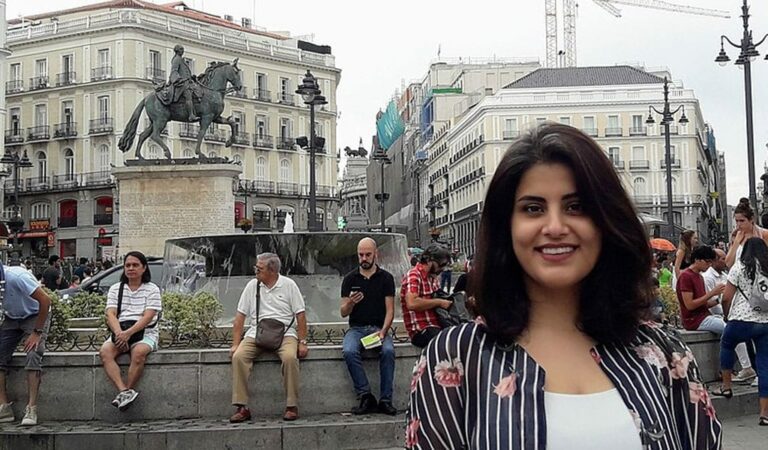 Instead of pivoting towards Iran, Biden should use his antipathy towards the Saudis to push for human rights in the kingdom

Prominent Saudi womens rights activist Loujain al-Hathloul was finally charged with spying with foreign parties and conspiring against the kingdom and sentenced to five years and eight months in prison.

The court then suspended close to two years of the sentence and backdated the start of her time in jail to May 2018 (when she was last put in a Saudi prison), leaving al-Hathloul, now 31, with about three months remaining in her sentence.

Al-Hathloul was one of the leading activists pushing for the right of women to drive in the kingdom.

The question is, why is this happening now? We asked this same question in 2018 when al-Hathloul, along with other well-known womens rights activists, were arrested and detained without charges just a month before the ban on women driving was set to be lifted in the kingdom.

At the time, reform was just beginning to happen in the kingdom; however, it was clear that the countrys rulers intended it to happen on their terms and their terms only. There would be no popular uprising or perceived influence from activists.

Two years later, Saudi Arabia finds itself in a precarious position vis-Ã -vis the shifting structures in the Middle East and globally. No doubt if Trump were to have gained a second term in office, the Saudis would have joined other Gulf and Arab states in normalizing ties with Israel, both as a fortification against Iran and a way to take the kingdom into the 21st century.

If this were the case, they might have let al-Hathloul rot in prison for 20 years, as fellow activists originally feared based on the original charge sheets they saw against her.

But now, with a Biden administration in the wings, Crown Prince Mohammed bin Salmans brainchild, Vision 2030, is in danger. Vision 2030 is the princes strategic framework to reduce Saudi Arabia’s dependence on oil, diversify its economy and develop public service sectors such as health, education, infrastructure, recreation and tourism.

Other key goals of the vision include attracting investment in the kingdom. This cannot be done without transforming the countrys image, especially in the eyes of the U.S.

Trump did not spend the last four years putting the screws in Saudi Arabia for its human rights violations as he was looking to a bigger picture in the fight against Iran. Yet a Biden administration is likely to do just that at the price of regional stability and other disastrous results.

Biden, like his boss before him, is keenly interested in engaging Iran and re-entering the nuclear agreement made under Obamas watch in 2015. Unlike Trump, who withdrew from the faulty agreement and spent the last four years trying to bring the Islamic Republic to its knees, Biden has indicated he will empower it.

Ironically, while there is a lot of noise coming from the Biden administrations transition team against Saudi Arabia for the human rights abuses prevalent in the kingdom, these same pundits tend to be silent on the horrific abuses emanating from Iran.

There appears to be no acknowledgment from the Biden camp regarding Irans prolific worldwide terrorist activity, including those that have cost thousands of American lives.

The unprecedented progress toward peace in the Middle East made recently by the Trump administration is just one reason why it would be a historical blunder of enormous proportions for the Biden administration to pivot toward Iran.

The second involves what such a rapprochement would accomplish in real terms: the enabling of the largest state sponsor of terrorism gaining a pathway to nuclear weapons.

Instead of giving Iran the money and legitimacy to accomplish this goal as well as continue its nefarious activities, the Biden administration should use its perceived cool relationship to the kingdom to exact progress in human rights as a condition for the type of warm relationship the kingdom so needs with the United States.

At the time of her latest arrest in March 2018, al-Hathloul was studying in the United Arab Emirates. Her colleagues say Saudi security forces arrested her there and forcibly brought her back to Saudi Arabia.

While in detention, al-Hathoul charges she was not allowed to speak to anyone for seven weeks after her arrest. Human rights groups further claim that al-Hathloul, along with at least three other womens rights activists, were tortured with electric shocks, flogging and sexual assault — allegations the Saudis deny.

In August 2019, the Saudis offered to free al-Hathloul from prison in exchange for a video statement denying that she was tortured, according to al-Hathlouls family. She refused.

Al-Hathloul went on a hunger strike in October as well as another time in 2020 to protest the conditions of her detention but stopped after authorities began waking her up every two hours.

Al-Hathloul previously spent 73 days in a Saudi jail in 2014, when she drove her car across the border from the UAE into the kingdom.

In November 2015, she ran for public office in the first election in whichÂ women were allowed to register as candidates. Even though she registered, her name did not appear on the ballot. The same happened to fellow pro-driving activist Tamadour al-Yami.

Al-Hathloul wasÂ arrested in 2017 at the Damman Airport in eastern Saudi Arabia with no reason given but was released sometime before her last arrest in March 2018.

Until June 2018, Saudi Arabia was the only country in the world where women were not allowed to drive.