Nation of Islam Leader Rails Against Jews, Whites and the COVID Vaccine 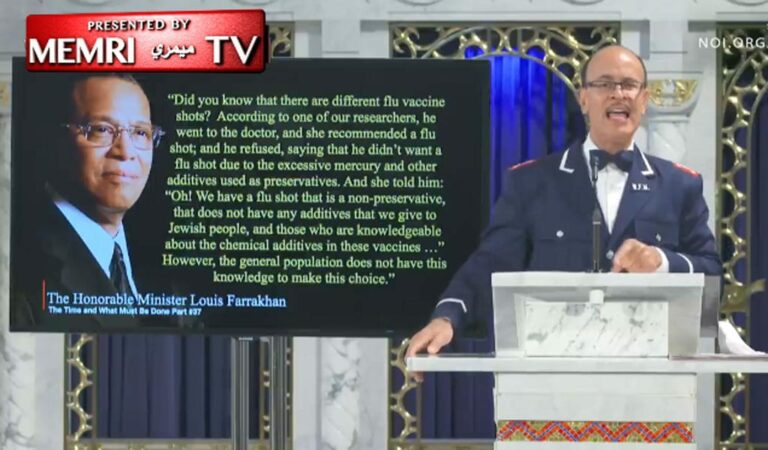 In a diatribe against Jews and white people, the assistant to Nation of Islamâ€™s leader Louis Farrakhn, Ishmael Muhammad, rails against the COVID-19 vaccine.

In a series of lectures titled â€œAmericaâ€™s Wicked Planâ€ given between December 6-20, 2020 at the Mosque Maryam and uploaded to YouTube by MEMRI (Middle East Research Institute), Muhammad â€“ quoting Farrakhan â€“ first claims that a doctor said that Jews were given a different flu vaccine than others â€“ one that did not contain mercury and other harmful additives.

â€œWhy do you put additives in one, and remove it from another, except that thereâ€™s something in that additive that you want to infect the population with, that over time will manifest in ailments, sickness, disease and a compromised immune system?â€ Muhammad asks.

As with all demagogues, Muhammad takes the facts and skews them to support his conspiracy theories. In reality, a mercury-based preservative, thimerosal, was used for decades in vaccines. Even though thimerosal is cleared from the body relatively quickly and is not toxic like methylmercury â€“ the type of mercy found in certain kinds of fish, for example â€“ the substance was removed from vaccines in 1999 as a precautionary measure.

Muhammad continued his accusations against the Jews, using Farakkhanâ€™s common appellation for Judaism, the â€œsynagogue of Satan.â€

â€œMany today have fallen out with the minister over his exposing of Satan and the synagogue of Satan â€¦â€ Muhammad claimed. â€œWhen Jesus encountered them [the Jews] 2,000 years ago, they said we are the seed of Abraham. They claim to even be the children of G-d! You [the Jews] seek to kill a man who has only told you the truth? And guess what Jesus called them? Devils!â€

Muhammad then claims that the father of the Jews is the Devil, himself. â€œLies and murder are born in the very nature of this people. They are the product of genetic engineering. They are the product of bio-engineering. The Caucasian people were brought out of the original people through science, genetic engineering and by Yakub [Jacob] their father looking into the DNA â€¦ And their very nature is to kill off darker ones. Kill the blacks, save the lighter.â€

Muhammad concludes by saying, â€œThe Caucasian people are a dying species on our planet. Their womb cannot produce anymore, so they are trying to destroy the darker people of our planet â€¦

â€œThese bioweapons are designed to kill. Scientists warn that humans should be worried about being wiped out by a killer pathogen that is specifically designed to kill people of only a particular race based on their genetic material.â€

Farrakhan has a long history of antisemitism, Holocaust denial and anti-white extremism. He regularly calls Jews â€œSatanicâ€ and claims that they â€œcontrol everything and mostly everybody.â€ He has denounced Jews as â€œbloodsuckersâ€ and claimed that â€œZionists dominateÂ the government of the United States of America and her banking system.â€

In a July 4th event, Farrakhan live-streamed on YouTube a three-hour speech in which he railed against Jews, accusing them of poisoning him with â€œradiated seedâ€ to test if he is truly a man of God and that his survival was proof that he is. The event was originally scheduled on 20th Centuryâ€™s Foxâ€™s channel Fox Soul but canceled due to public outcry.

Farrakhanâ€™s organization, the Nation of Islam, is one of the wealthiest black organizations in the U.S.