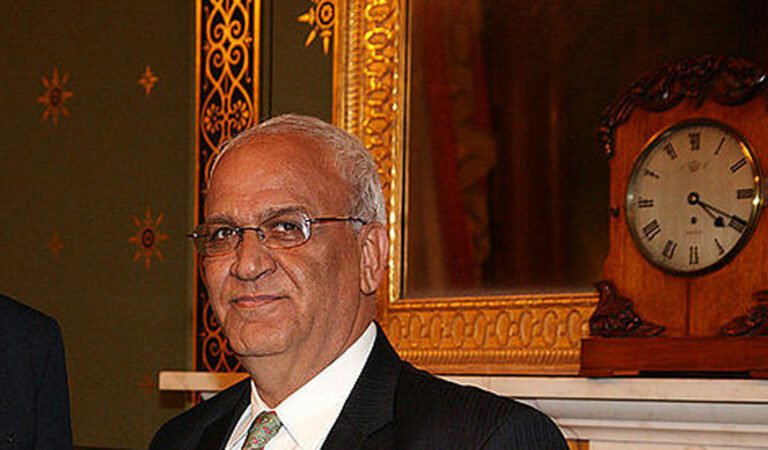 Harvard University named Palestinian chief negotiator Saeb Erekat — who serves as secretary general of the Executive Committee of the Palestine Liberation Organization (PLO) — as a fellow at the Kennedy School Belfer Center for Science and International Affairs.

Erekat, a man who called random stabbing attacks on Israeli citizens by Palestinian terrorists self-defense will be charged with mentoring students and giving seminars in the schools “The Future of Diplomacy Project.”

PLO member Erekat is one of four new fellows appointed by the school to the project. Commenting on the appointments, faculty chair Nicholas Burns said that the new fellows will strengthen our capacity to learn the lessons of effective diplomacy and statecraft.

Since its inception, the PA has pleaded poverty and solicited donations from the world community. As of December 2018, the U.S. government had given the Palestinian Authority $5 billion in taxpayer dollars since 1994 (post the Oslo Accords). The European Union is one of their largest funders of the PA as well. Besides being used to line the pockets of top PA executives, Israel maintains that a good portion of this donated money has been used for terror.

The Palestine Liberation Organization was founded in 1964 with the purpose of “liberating Palestine” through armed struggle. Most of the enormous amount of violence perpetrated by the group over the years has been aimed at Israeli civilians.

The PLO was considered by the United States to be a terrorist organization until the Madrid Conference in 1991.

In 1993, the PLO ostensibly recognized the right of Israel to exist, yet continued to perpetrate terror attacks against Israel. It coordinated those attacks during the 2000-2005 Second Intifada and afterwards with the Palestinian Authority, its governmental arm.

Erekat has been involved in every Israeli-Palestinian peace negotiation since 2000 all failed endeavors (most likely due to the fact that he explicitly stated in a 2014 interview with Al Jazeera, will never recognize Israel as a Jewish state.

Nevertheless, Erekat will now bring his expertise both as a diplomatic and as the author of 14 books on foreign policy, oil, conflict resolution and negotiations to Harvard, where students at one of the most prestigious foreign policy schools in the country will be educated by him.

Update: The Algemeiner reports that a legal challenge has been mounted to Erekat’s appointment by Neal Sher, a former director of the Office of Special Investigations in the Department of Justice (the office which pursues Nazi war criminals). In a letter to U.S. Attorney General William Barr, Sher mentioned an overwhelming amount of publicly available evidence that Erekat used his position of prominence to endorse terrorist activity in a way that undermines United States efforts to reduce or eliminate terrorist activities. Accordingly, he is ineligible to enter the U.S. under Section 212 of the Immigration and Nationality Act.

Specifically, Erekat is the architect and most visible advocate and apologist for the so called ‘Martyrs Fund’ a diabolical policy of the PLO which handsomely pays terrorists and surviving martyrs families, including those of suicide bombers who were killed during their acts of terror Sher stated.