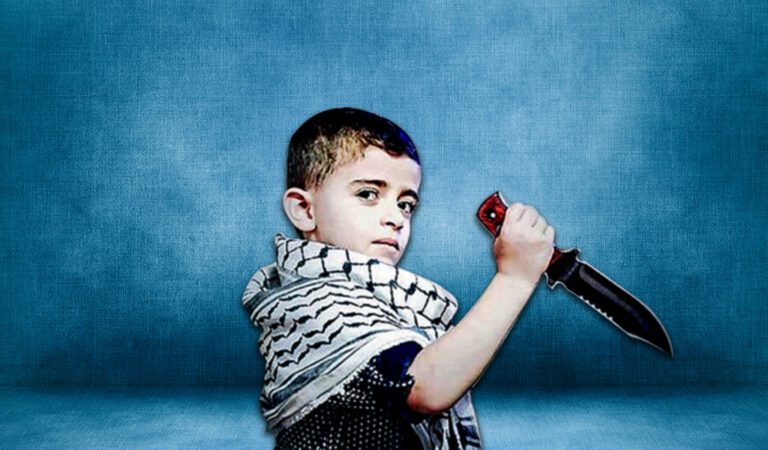 From Hamas to the Palestinian Authority, ISIS and beyond

â€œI will make my body a bomb that will blast the flesh of Zionists, the sons of pigs and monkeys. I will tear their bodies into little pieces and cause them more pain than they will ever know.â€ (Palestinian child suicide bomber)

There are hundreds of examples of child soldiers in the world. Children are used as suicide bombers, militants and infantry soldiers. Their innocence is shattered and misused in political violence, especially for religious jihadism.

Children trained by jihadis are used to kill and slaughter â€œinfidelsâ€ by terrorist groups such as Al-Qaeda, Taliban, ISIS and Hamas.

Terrorism is a weapon of weak which is used against power. Terrorists use weak, vulnerable people like women and children against powerful states and militaries, as well as civilians.

Child soldiers have been utilized in armed conflicts around the world for much of human history. The Zulu kingdom of southern Africa, for example, was known to utilize children in their military. Humanitarian groups such as the United Nations Children’s Fund have been trying to reclaim and rehabilitate these children.

The al-Qaeda–affiliated group Boko Haram has recruited and used thousands of children as combat soldiers. The Nigerian military has arrested and freed many of these child soldiers.

The â€œrecruitmentâ€ process of Boko Haram is quite different than others in the region. They knock the local inhabitantâ€™s door and ask them to hand over at least one of their children (a boy or girl).

If they refuse, they kill the parents and abduct the children. Under fear of death, thousands of local residents have handed over a child to protect their families.

The United Nations reported that between January 2013 and March 2019, the Nigerian armed forces detained over 3,600 children — including 1,617 girls — for suspected involvement with non-state armed groups.

The Taliban, located in Afghanistan and Pakistan, have also recruited thousands of underage children for the purpose of turning them into suicide bombers. Some reports list the group as having nearly 50,000 children on a waiting list to be suicide martyrs.

At the same time, their parents were receiving thousands of dollars as payment to use their child for this â€œholy cause.â€

According Pakistanâ€™s police crime investigation wing, â€œAnyone could buy a suicide bomber for $15,000 from the tribal WANA area. In fact, in Pakistan, terrorism has become an â€œindustryâ€ which runs â€œfactoriesâ€ of suicide bombers.

â€œOn March 13, 2013, Quetta police announced the arrest of 11 children who were allegedly involved in a series of bomb explosions. The teenaged suspects’ ages ranged from 11 to 18, and they all came from poor families. Police claimed the teenagers were responsible for more than one dozen bomb explosions and that terrorists paid them 2,000 to 5,000 rupees ($19 to $47) per bombing.â€

In Afghanistan, the Northern Alliance commander was quick to identify youngsters as among the groupâ€™s best troops. In one report, an officer described a child soldier in his unit as the finest soldier he had ever commanded. The 15-year-old had been fighting since he was 10 and could hit a man in the head with an AK-47 200 meters away.

ISIS is famous for recruiting children and using them to slit the throats of infidels as well shoot them in their heads.

Thousands of young people from all around the world joined ISIS, especially from European countries. These young people were trained to execute the â€œenemies of Islamâ€ and brainwashed to believe that even their parents are infidels or enablers of infidels since they did not believe in ISIS’ ideology.

ISIS groomed children to be the next generation of fighters for the terror group. ISIS propaganda videos show children being put through rigorous physical training. One female ISIS teacher told a news outlet she was an ISIS teacher who prepared girls as young as 10 for suicide attacks.

The EUâ€™s anti-terrorism chief warned that 45,000 children were born to ISIS families in the former “caliphate.”Â These children are being denied citizenship in Iraq and Syria. Now stateless, they have become a concern and threat to the international community.

Hamas indoctrinates Palestinian children to be jihadis and kill Jews. Hamas children are brainwashed that they will enter paradise if they commit suicide attacks and kill as many Jews as they can.

Hamas has recruited thousands of children for the â€œcauseâ€ of martyrdom. These children undergo weeks of training in stone throwing and stabbing in order to murder Israeli civilians and army personnel and are promised 72 virgin females in paradise for doing so.

Hamas runs annual summer camps for children and adolescents of the Gaza strip. The children are taught how to shoot, kidnap and stab Jews, as well as how to launch mortars and throw fire bombs against the Israeli army.

The cost of training Palestinian child soldiers is very low. Children are especially valued since they can infiltrate “the enemy” more easily than adults.

Experts note that the total cost of a typical Palestinian terrorist attack is about $150, with the most expensive part often being the bus fare to transport the terrorist to his or her target. This means that for a very low price, a young suicide bomber is able to kill or wound all individuals within a 25â€“50-meter radius.

Why Children Are Vulnerable

Case studies indicate that in the majority of conflicts, the primary method of recruitment of children is through some form of abduction.

There are many organizations whose policy is that each family within its areas of control must provide money or a child to the group. For example, in Sri Lanka, the Liberation Tigers of Tamil Eelam (LTTE) reportedly maintained sophisticated computerized population database to direct recruiting efforts.

All children are not automatically taken in such operations, rather only those who meet certain criteria decided by the groupâ€™s leaders. Homeless, orphan and street children are the most vulnerable for abduction and recruitment.

There are many other factors which contribute to children joining terrorist organisations: religious, socio-economic, family and media.

Religious motivation is particularly strong in recruiting children for jihad. Children are taught to dream of rewards in heaven for being a martyr. They are taught passages from the Quran claiming that a shaheed, or martyr, will be immediately forgiven all his sins and will be married to 72 beautiful virgins in paradise.

In the words of a Liberian militia commander, â€œChildren make the best and bravest â€¦ Donâ€™t overlook them. They can fight more than we people. It is hard for them to just retreat.â€

Preventing children from being recruited to be child soldiers is, to a large part, the responsibility of the state. States need to strengthen their laws and security to protect children from joining the terrorist organisations.

The first way is to ban these organizations.

Children also need to be fed and educated properly. Homelessness, poverty and illiteracy are key factors which turn infants into infantry soldiers.

Children who grow up under these conditions do not value life because they do not see any future for their dreams. As Fadl Abu Hein, a psychology lecturer from Gaza, notes, â€œMartyrdom has become an ambition for our children. If they had a proper education in a normal environment, they wonâ€™t have looked for a value of death.â€

The New Children of Terror, Chapter 8, by P.W Singer.

Spend a Summer of Jihad With HamasÂ