The Far Right Part I: Who Are They and What Do They Believe? 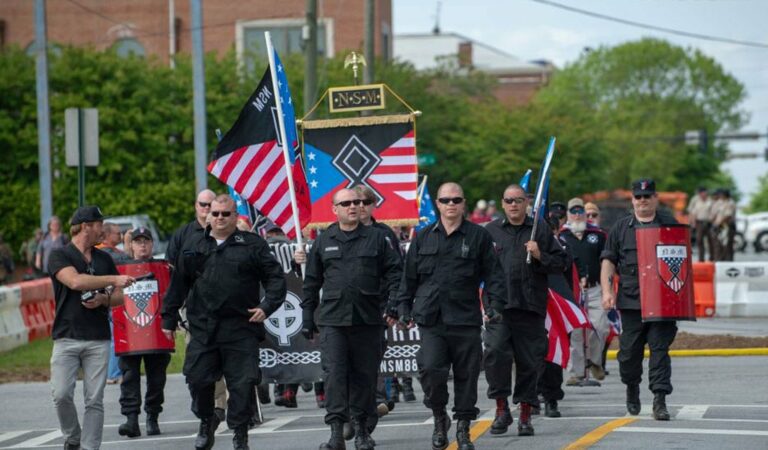 Who are the Far Fight? And what do they really believe?

Itâ€™s easy to figure out what the Far Left believe; they have an explicit political program that they want to implement. The same for Islamism, they want a theocracy run by sharia law.

The Far Right is a little more dicey. Thatâ€™s partly because sections of the Left like to label anyone who doesnâ€™t agree with them as Far Right.

Itâ€™s also partly because â€œfarâ€ is a relative term. As the spectrum of acceptable political opinion (termed the Overton Window) shifts to the Left, positions which were mainstream a decade ago are now considered to be Far Right.

The two most obvious examples of this are being against gay marriage and considering biology to be the basis of gender. Both of those positions were mainstream until just recently. Now, both are considered to be unacceptable by large political factions.

Another reason is that the Far Right themselves are highly fragmented. Here we look at three of the major Far-Right factions, and some of the core beliefs:

Fascism is what most people think of when they hear the word â€œFar Right.â€ These groups espouse ideologies directly descended from the Third Reich and Italian fascism. Nor is this group restricted to Germany and Italy. There were fascist admirers and parties in countries across Europe, including The British Union of Fascists headed by Sir Oswald Mosely, Marshal Petainâ€™s Vichy France, Fritz Kuhnâ€™s German American Bund and Adrien Arcandâ€™s National Unity Party.

All of these organizations still have active ideological descendants today.

Racism is not just an undercurrent of the movement or something that it is incidental to the ideology. The race struggle, for the fascist or neo-Nazi is the entire point.

They see the â€œraceâ€ or â€œnationâ€ as a metaphysical entity created from a shared blood bond rooted in biology. This ideology is a direct descendant of the German romantic movement of the early 19th century, which is why it focuses on the passions and raw, animalistic strength.

Of all of the Far Right groups, neo-Nazis and fascists are the most dangerous. They idealize violence, not simply as a means to an end, but as an end in itself.

This is because they see war as the ultimate test, which pushes people to the limits of excellence.

This ideology is explicitly racial in the same way as neo-Nazism and fascism is. However these groups donâ€™t share the fascist obsession with a cult surrounding a strong and powerful leader.

This form of Far Right extremism is rooted in American history. They grew out of the losing Confederate side in the US Civil War (1861-1865).

The confederacy wanted to maintain their economic system of slavery and enforce domination of white people over blacks. This system was based on the same pseudoscientific race theory that white people are racially superior to black people later adopted by Nazis.

The main political theory these groups espouse is that the secession of the Southern states was both a legal and legitimate act in the face of unjustified Northern aggression, and that black people must be violently suppressed to maintain white civilization.

The Ku Klux Klan is probably the most famous organization which espouses this ideology. The original Klan used violence to maintain white control over the newly freed former slaves.

Unlike the other groups on this list, neo-reactionaries do not prioritize racism. They do usually consider themselves open to the possibility that qualitative genetic differences exist between races and make a difference in the course of civilizations.

Their main critique of democracy is that it is inefficient, weak and has too many competing interests to yield useful results. They argue that order is far more important than freedom.

Curtis Yarvin, a leading neo-reactionary theorist who writes under the pen-name Mencius Moldbug, argues that the problems of modern America stem from the domination of Left-Wing progressives who control the country as a sort of unofficial state church via the universities and the media.

Yarvin argues that the Leftâ€™s ideology is descended from radical English Protestantism, and that this movement has destroyed sound government.

Opposing liberalism is the central plank of the neo-reactionary platform. The slogan â€œRestore the Stuartsâ€ is used semi-ironically online to refer to both restoring the absolute authority of the extinct line of English monarchs, as well as to the broader platform of rolling back pretty much the entire liberal project since mid-17th century England.

Neo-reactionaries argue for a restoration of a premodern order which prioritizes efficient government and hard currency.

Yarvin wants to reconstitute the state along the lines of a jointly-held stock company. Under this system, which he calls â€œFormalism,â€ property owners would select a ruler in the manner of a CEO, who would then run the country with complete authority, unencumbered by the democratic process.

Although the NRx, as they style themselves, do think the South was in the right during the Civil War, they would typically go much further than that, viewing the American Revolution itself as an illegitimate and treasonous rebellion against the Crown.

Of the three groups, the NRx are the most cerebral and least violent.

There are other, smaller, factions of the Far Right, as well as crossover groups involving the more radical ends of the libertarian spectrum. However, these three are the most prominent, and itâ€™s most likely that if someone is talking about the Far Right, they mean one or all of these groups.

Of course, all these groups share many views, in particular opposition to liberalism and democracy. All of them ultimately want to replace the current American government with a completely different, and far less free, structure.